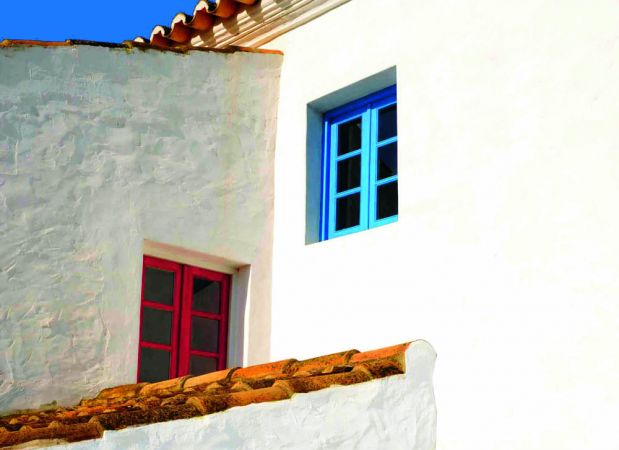 It's the ultimate escape to the country: A high-powered advertising executive goes on holiday, falls in love with a rural backwater and quits his job, swapping an expense account and 15-hour working days for a tumbledown village and a back-to- nature lifestyle.
It sounds like a flight of fantasy, but Antonio Ferreira has made it his living, breathing reality. The Lisbon-born high flyer, who handled communications strategy for the advertising agencies Young & Rubicam and J Walter Thompson, moved his whole family to the western Algarve and went about bringing Aldeia da Pedralva, a 200-year-old village near Vila do Bispo, back to life. And he's never regretted it.
"I felt like I was living in a washing machine in the city. I didn't have control over my life," says Ferreira, his olive skin glowing from a heady cocktail of sunshine and fresh air. "I found it's fine to have a big car and eat in nice restaurants in Lisbon, but it's not real."
Ferreira and his family first stumbled upon the former farming village - it had just 10 houses and a handful of ageing locals - while on holiday in 2006. Close to the village they found another 40 properties in ruins, overgrown and unloved on the Algarve's less popular west coast. A once proud agricultural community of more than 200 had dwindled to just nine residents, the majority having left in search of work in Lisbon or Faro in the 1970s.
Drawing on his business acumen and inspired by a childhood holiday with his grandparents in a central Portuguese village, Ferreira realised that this was the project he had been searching for. Bringing the dead village back to life as a tourist destination would be his escape from the rat race.
"Life is different here," says Ferreira. "You buy your dinner from the fishermen, your vegetables from the village shop. I saw that there were other people in the city who felt like me, and I decided to build a place where we can all feel at home."
Ferreira initially bought three houses and spent the next few years buying and rebuilding another 20, restoring the traditional properties, tinged with touches of Arabic architecture, to their erstwhile rustic glory. But more than that, he wanted to breathe life back into Pedralva, striving to present the values and traditions of forgotten village life to a new audience of contemporary holidaymakers.
He deliberately recycled old materials, using second-hand roof tiles, wooden doors and broken-down furniture for the new houses. A group of his former advertising colleagues invested a total of €4m in the properties, while the local council ploughed €1m into building new roads and street lighting. The village shop stocked its shelves for the first time in 25 years, and the community oven was coaxed out of retirement to bake fresh bread. A dedicated reception and restaurant, plus a small outlet store, have since opened for business.
Today the village is buzzing with life. Wafts of eucalyptus perfume the air, international visitors rub shoulders with elderly villagers tending the communal vegetable patch, and people load up their cars for day trips around the Costa Vicentina Natural Park. There are now 24 whitewashed stone houses, with 40 rooms between them, and modern comforts such as Nespresso coffee machines await behind the pastel-hued front doors.
But how does Pedralva's strategy director square his vision for a community-tourism eco-village with the cold, hard reality of making money? "It is a business, of course," he explains. "We have to pay the employees and keep on good terms with the bank. But it's more than just a simple tourist project. It has soul and a story. By staying in Pedralva, we can understand the real Portugal away from the Algarve resorts."
Indeed. While the Algarve is traditionally associated with behemoth resorts and crowded beaches, some 70% of the region benefits from protection for its natural diversity - from rare plant and bird species to many unspoiled beaches away from traffic pollution. Ferreira recognised this as the area's strongest selling point and applied his business experience to create a clear vision for the new Pedralva.
"I knew from 20 years of working in advertising that we needed a unique proposition. Of the 20 million people who come to the Algarve each year for tourism, the number looking for a more authentic, close-to-nature trip is growing by 10%," he says. "Today, we have the market and the product. But it will take at least 10 years to turn a profit. Currently, we are investing profits into developing the product."
The focus for 2011 is not on restoring more houses, but developing the activity side of the business with a series of new packages based around nature tourism. These combine self-catering accommodation with guided hiking, biking, fishing and surfing excursions. Furthermore, Ferreira plans to open a nature sports centre in the village later this year with activities on site.
On the cultural side, they are planning to open some old village buildings to artists and craftspeople to develop a programme of artisans in residence. There are four artisan fairs in the village each year - the next one is on 23 April Pedralva is gearing up to welcome an expected 1,200 visitors in 2011, and is aiming for at least 50% occupancy through the year. The summer is booked out with Spanish and Portuguese families, but the shoulder seasons attract a more international crowd for guaranteed sunshine and activity-based packages. Most of all, everyone leaves the village with a rare insight into rural traditions as seen from a grass-roots level.
"This project is a mix of a business venture and something deeply personal for me," says Ferreira. "Sometimes I feel like two people: one makes the business deals, but the other is just happy to do something to help in the area.